At the gorgeous Prestonwood Country Club in Cary North Carolina, Caroline and Jason celebrated their marriage in a grand ballroom filled with their closest friends and family and stunning decor. More than anything this day was about their family and friends. Their parents and grandparents play important roles in their lives and we caught some beautiful moments of them on the wedding day, and Caroline and Jason paid tribute to the Grandparents that were watching them celebrate from above. The anchor of their wedding day and their wedding film was the moving words spoken by their minister, who was also Caroline’s minister since childhood. At the reception Caroline and her Father shared a fun filled dance together to “I Feel Good” and the party took off from there. The bridesmaids and groomsmen joined on the dance floor, everyone decked out in cool black sunglasses! At the end of the night the newlyweds departed to a friendly UNC vs. NCSU pom pom send off!

“…we just viewed your amazing wedding video… it’s not really a video, it’s a work of art!  We chose to view it yesterday on our “3 month” anniversary to celebrate!  Now that we have seen it we are just thrilled! They are so wonderful and it was amazing to see some of the moments we were not privy to on the wedding day and relive other special moments.  You and your team are spectacular.”
-Caroline (bride) 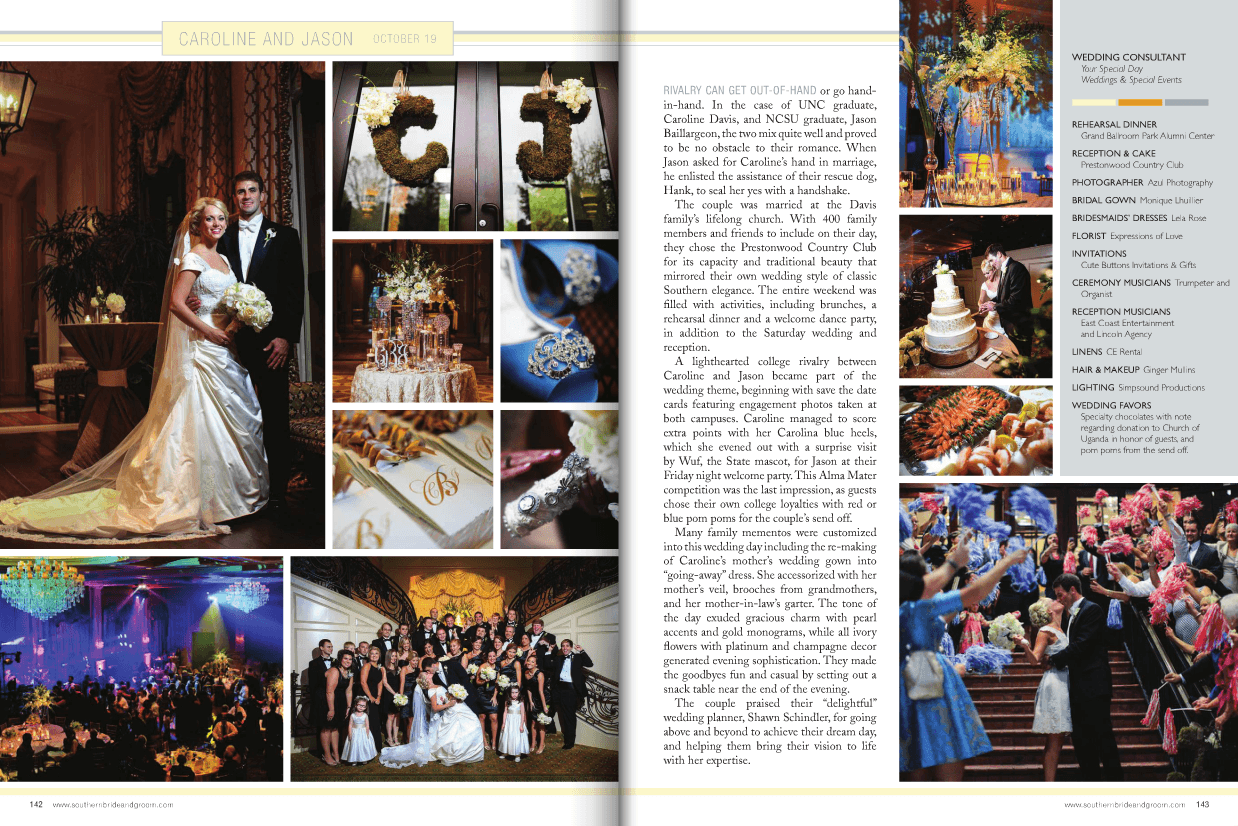 Caroline and Jason were acquaintances through many mutual college friends for a few years before they began dating. During Caroline’s senior year at Carolina, a friend (and now bridesmaid) hosted a get together on Valentine’s Day for all friends that were not spending time with a special Valentine. Jason came to Chapel Hill for the event. That evening they caught each other’s eye, went on their first date the following week and so began the start of a wonderful relationship. Jason traveled from Raleigh to Chapel Hill often over the next few months and even attended all the March Madness events, as Carolina went on to win the 2009 National Championship. Caroline knew he was a keeper if he would brave ‘enemy territory’ during March Madness so they could spend time with each other. After graduation, Caroline moved to Raleigh to begin her career and their relationship grew stronger. In 2012, Jason and Caroline adopted their pup Hank and he has now become the couple’s “first child.” Four and a half years later, most of Caroline’s family/friends still cannot accurately pronounce Jason’s last name; however, she is ecstatic to take it as her own in October.

On July 1st, 2012- in the record books as the hottest day of the year in Raleigh- Jason caught Caroline completely off guard and proposed to her. Having enjoyed a nice weekend hosting out of town friends at her house, Caroline was expecting an uneventful Sunday afternoon (indoors)! Jason had other plans and at that point he began his quest toward the perfect proposal. Jason planned to propose in the town they originally started dating and suggested they go to Chapel Hill to “walk around campus because they hadn’t been in a while.” Recalling that it was the hottest day of the year in Raleigh, you can imagine Caroline’s face and reaction to such an out-of-the-blue idea. Determined to propose outdoors and allow the ring to fully sparkle in the sunlight, he then tried to persuade her to “walk around Moores Square in downtown Raleigh to check out some new places.” Again, you can imagine Caroline’s reaction given the temperature. Knowing he had planned a celebratory dinner with her parents at 6pm, in one final attempt he convinced Caroline to take Hank for a long walk through the nature trail in her neighborhood. Despite the heat, it could not have been a more perfect setting because as Jason got down on one knee to unveil a beautiful ring, Hank perched his front paws on Jason’s knee and eagerly looked at Caroline awaiting her answer. The proposal truly was a family affair! Jason timed the proposal to coincide with the July 4th Holiday to ensure they had the next week off work to celebrate with close friends in Wilmington and then his family at Ocean Isle Beach. Needless to say, Caroline learned that sometimes, regardless how out-of- the-blue or crazy an idea may seem, you should just say YES!