The Meeting…
They met at church. The groom’s father happened to be the pastor. She was smitten at first but due to age difference stayed away. As the two families became closer and interacted more, they developed a friendship but still did not consider the option of dating. After 3 years of a budding friendship and a couple lake trips, they started dating her Freshman year of college.

The Proposal…
He proposed in Paris. They had the opportunity to travel to Europe, and then met up with her family for a cruise. On their trip, they went to London, Amsterdam and Paris. She was suspicious that he might propose on the trip but once three days passed she was convinced it just wasn’t going to happen. They were in Paris at Luxemburg gardens. Upon entering the garden she leaned over and said this is where you should have proposed. They walked around and found a quiet bench hidden from the other tourists. He then asked, do you want to take a picture? She said sure and instead of pulling out the camera, he pulled out a ring box. She was so so excited and could not believe he had tricked her. It was perfect.

The Details…
They wanted an elegant but casual feel and invited 550 of their closest family and friends. The grooms father officiated the ceremony, which was very special and held a deep meaning to the couple as well as the guests and his words set a very personal tone for their film, his opening statement in which he says to his son to “step away from your mother and I, and create your own family” is truly the basis of this film, this tied the whole opening together with the purpose of marriage in which Christian is coming together with Katie to start their own family. The card exchange and first look before the ceremony were two special parts of the day that they were very excited about, they pretty much wrote the same thing to each other which made their reactions even better, we threaded the first look and ceremony entrance together to further show them leaving their families and coming together to start their own family.

“I cannot speak enough kind words about Heart Stone Films. Chris and Toni were wonderful from beginning to end. We had not met prior to my wedding, but looking at the video, you would think we have known each other for years! They caught every detail and the video they made was so special. Though I do love my wedding photos, there is just something so special about being able to watch my special day over and over again. Chris and Toni, I cannot thank you enough for the part you played in my wedding day!”…Katie, Bride

Check out their wedding Featured on Style Me Pretty 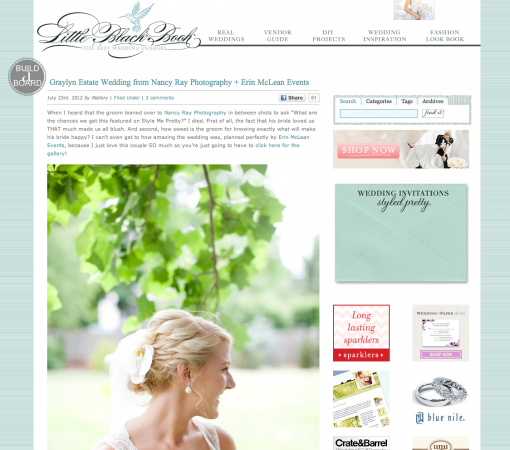 Wow! That was beautiful! Great work putting this together!

Thanks Laurie! It was such a beautiful wedding with a sweet couple!