Julie + George had A gorgeous summer wedding in Raleigh, North Carolina. Cute paper lanterns, stunning orchids, and a beautiful blend of Chinese and American culture made this wedding stand out. This couple had so much energy and fun together and it really shined through in their wedding film. George even created a cute video for Julie to watch on the new iPad he gave her on the wedding day! Enjoy their film and check out their feature below! 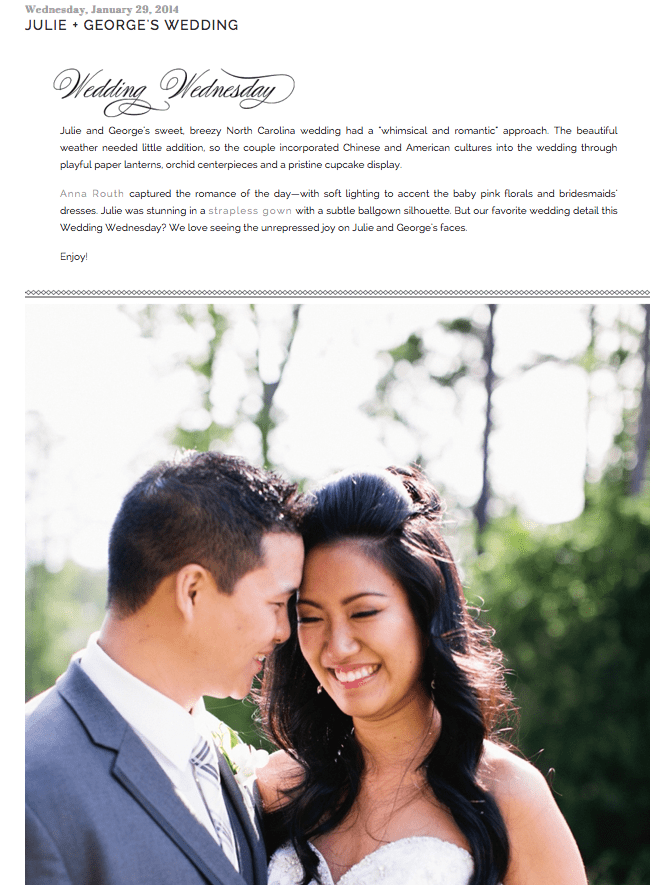 The Meeting…
Finals week – the single most dreaded phrase in the vocabulary of any student. It was the Friday of the weekend before Finals Week, and he had “exciting” plans to spend the night studying for upcoming exams. But his friend, Khalil, had other plans for him…being the great friend that he is, Khalil said “George, stop being a loser and come out with me tonight. The books will still be there tomorrow morning and you’ll have the rest of the weekend to study. Trust me, it’ll be worth it.” Little did George know that Khalil was playing Cupid and had set up a “meeting” with Julie and her friends that night just so he could introduce them to each other. Turns out that George made the best decision of his life when he gave in to Khalil’s peer pressure and decided to go out that night. Julie and George instantly hit it off over a game of foosball and he knew he’d hit the jackpot when Julie agreed to join him at the library the next day to study for finals. They would spend countless hours studying for finals over the next weeks, and began “officially” dating a few weeks later.

The Proposal…written by George
The Place – Wonderful, luxurious Gaitlinburg, Tennessee (whoa whoa whoa, timeout …where did you say again? Gaitlinburg? Where in the world is Gaitlinburg? What IS in Gaitlinburg? Yeah, those were my thoughts exactly before we made this trip, haha).

The Plot – Julie and I had talked about going on a vacation with her close group of friends (Lisa, Tony, Danny, Connie, David, and Charley – aka “The Famree”) the weekend before I was to start my Fall 2012 semester of dental school. After some discussion, we decided to go to Gaitlinburg, TN, rent a cabin in the mountains, and enjoy a weekend of rafting, hiking, and other outdoor activities in the Great Smoky Mountains. Ironically, it just so happens that a week or two before this trip, Julie had half-kiddingly, half-seriously asked me when I was planning to propose. (Even though Julie and I had been dating for only 8 months, we both knew we wanted to marry each other after a couple months of dating. Julie had no idea, but I had already been shopping around for an engagement ring over the past couple of months – I just hadn’t decided exactly when or how I was going to propose). So I casually and cooly said, “Babe, you know that I want to marry you but I’ve been away all summer on externships and this semester is going to be really busy for me with residency interviews. I think it’s going to have to wait until sometime next year.” And BOOM … just like that, the trap was set, haha. Although I didn’t know how or when I was going to propose to Julie, I knew two things: 1) that I wanted her to be completely surprised and 2) that I wanted her closest friends to be there when it happened. So after talking to Lisa (Julie’s best friend, Maid of Honor, and my PIC — partner-in-crime), I decided that this weekend trip to Gaitlinburg would be the perfect time to propose. I made secret arrangements to pick up the ring from the jeweler the week of the trip while Julie was at work, called Julie’s parents to ask for their blessing, and Lisa made sure that everyone going on this trip knew about my “secret plan”.

The Big Weekend – After a 6 hour drive, we got into Gaitlinburg on Friday afternoon and settled into our beautiful, gigantic 4-story, 8 bedroom cabin. Lisa and I talked it over and finally we came up with the idea of going on an early morning hike with everyone in the Smoky Mountains to the site of a popular scenic waterfall, and I would propose to Julie as the sun came up. There was a problem though — we both were keenly aware that Julie likes to sleep in, especially when she’s on vacation, and so she probably wasn’t going to be too thrilled about getting up at the crack of dawn to go on a hike. But all of Julie’s friends did a fantastic job of convincing (more like peer pressuring, haha) Julie that going on this hike to see this waterfall was a “once-in-a-lifetime” opportunity and that it’d definitely be worth it. To my relief, she agreed and we all decided to leave by 6 AM the next morning. As a way of thanking all of Julie’s friends for waking up so early on their vacation, I decided to get up at 5 AM and make breakfast for everyone. I’ll be the first to admit that I am not the best cook in the world, so I was pretty grateful when Lisa and Tony also woke up early to save me from turning breakfast into an epic disaster, haha. Julie will be the first to tell you that I am not a morning person at all. On an average day, it usually takes me an hour or so to get out of “George’s morning grumpy, groggy mode”. This particular morning, however, Julie claims that I was “abnormally energetic and giddy for 6 AM”. I even remember her saying to me, “You’re acting really hyper and weird this morning. What’s gotten into you?”. To which I calmly replied with a smile, “Nothing, I’m just excited to go on this hike and see this waterfall. I love this kind of stuff” — little did she know she’d find out the real reason why I was so excited in a couple hours!

This is the best part of this story — in order to keep the ring box hidden, but at the same time quickly accessible when it came time to propose (I didn’t want to keep it in my pocket in case Julie saw the shape of it, and I didn’t want to have to dig around for it in my backpack), I decided to wear a fannypack. Yes, I, George Soung, a grown 28-year old man, decided to wear a fannypack in public. Well, to my credit, it worked because Julie surprisingly didn’t suspect a thing. I do remember her saying, “Are you seriously wearing a fanny pack for this hike? Wow … you are special” (haha, that’s my girl!)

We made the 30 minute drive to the Great Smoky Mountains, and got to Trillium Gap Trail that would take us up to Grotto Falls at about 8 AM. Unfortunately, the morning turned out to be cloudy and overcast, so proposing to Julie as the sun rose was no longer an option. It was still a nice morning though and I was just happy that it wasn’t raining. The 1.4 mile hike up to the waterfall was absolutely beautiful and breathtaking — on the way up, we even saw a black bear in the trees less than 200 feet from the trail! When we reached the top of the trail, the area opened up into a clearing with some small waterfalls. It was so nice that we all stopped to take pictures. At this point, my stomach was already in a knot from nervousness, and I remember making eye-to-eye contact with Lisa and knew we were thinking the same exact thing — “OMG, it’s almost time!” Julie was still completely clueless at this point; she was so engrossed in the beautiful scenery. We continued a little further up the trail and finally reached Grotto Falls. It one of those waterfalls that you could down behind and underneath, and it was truly a beautiful and romantic sight. GAMETIME was finally here, so I asked Julie to walk down behind the waterfall with me, to which she responded, “Let’s all go down there together!” My heart, which had already been racing at about 200 beats per minute, literally almost stopped. But without missing a beat (no pun intended), her awesome friends all said, “No, you guys just go ahead, we’ll come down in a bit.” Julie was SUPER (and I emphasize the word super) excited to go down behind this waterfall so she said “OK!” and ran down under the waterfall. Once we got down there, Julie was literally going nuts because she was so excited … I couldn’t get her to stand still or turn around long enough so that I could get ring out of the fannypack. That’s when Danny came to my rescue — all of Julie’s friends were standing out in front of the waterfall and had a direct view of us under the waterfall, so Danny started doing some poses and asked her to take some pictures of him. Julie FINALLY turned around long enough for me to get the ring out, and when she turned back around, I was on one knee. She was completely shocked and surprised, and even though I had a whole speech prepared, all I could say was “Jules, I love you so much … will you marry me?”

To put the icing on a perfect morning, right after I proposed, the sun, which had been hiding behind an overcast sky all morning, managed to peek through the clouds for a few minutes before disappearing again … I like to think that it was a sign of approval from God for a match that He made in Heaven, but it was probably just pure coincidence.

“Oh my goodness! Words cannot describe how happy George and I are with our wedding film! It brought us to tears again as we replayed our special day. Thank you so much for not only capturing our love but unforgettable moments shared with our closest family and friends on film.”…Julie, Bride