When we heard that Susan + Justin’s Cotton Room Wedding would be featured on Style Me Pretty, we were not surprised! S+J are one of the sweetest couples we’ve had the privilege of meeting, and as Julia Wade so eloquently put it, they put their entire heart and soul into this wedding! The ceremony took place at the infamous Duke Chapel where Susan’s parents were married 30 years earlier and the cozy candlelight reception followed at the Cotton Room, which looked as stunning as ever. 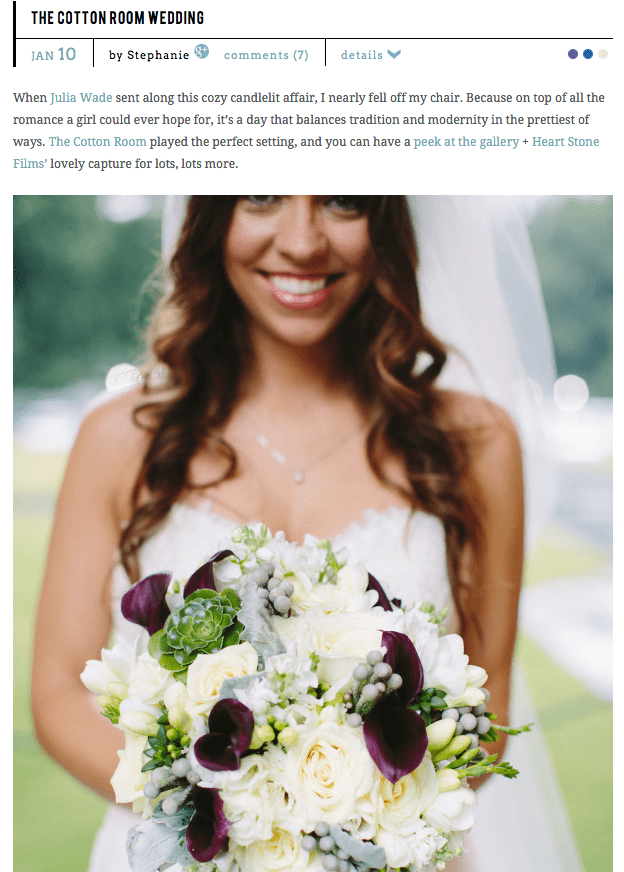 Read the rest of their love story….

She moved back to Raleigh when she graduated to start her new job at Duke Raleigh hospital, and he had also recently moved to Raleigh for a job after graduating from UNCW. She was hanging out friends in downtown Raleigh, when she noticed Justin walk in, and thought that he was really cute, he just kept walking closer and sat down at her table, and she was like who is this person? He happened to be friends with her friends, and she had not met him yet due to being absorbed in school. She was super smitten with him that entire night. For the following weeks, they were both asking their friends about each other, and she found out he was 22 at the time, which was 4 years younger than herself, so she immediately thought it would never work out, and assumed that he was immature and not on the same plane as her. He was very persistent, and she’s so glad he was because on their first date she was so impressed by his maturity, his ambition, his thoughtfulness, and the experiences he had abroad.

The Proposal…
They’re both avid scuba divers and found great tickets to Roatan, Honduras. His sister worked at a family jewelry store and was his partner in crime in finalizing the ring. She even delivered it to him at a friend’s bonfire, Susan none the wiser. They arrived to West End, Roatan Honduras and immediately went to the scuba shop to see if they could get a dive in for the day. Talking to their dive master afterward he suggested Half Moon Bay around the corner for snorkeling. Only on the island a few hours, Justin couldn’t hold it anymore. he hid his laminated picture of the ring and diving slate and they went for a sunset dip. Eventually he revealed the slate asking Susan to marry him and tugged her fin to propose under the water. She said Yes! He gave her the real ring and they enjoyed a magnificent dinner to celebrate overlooking the bay.

CALIFORNIA 🎥 Chelsea + Austin | You Are My Ligh

“My heart is and always will be yours” -Jane A