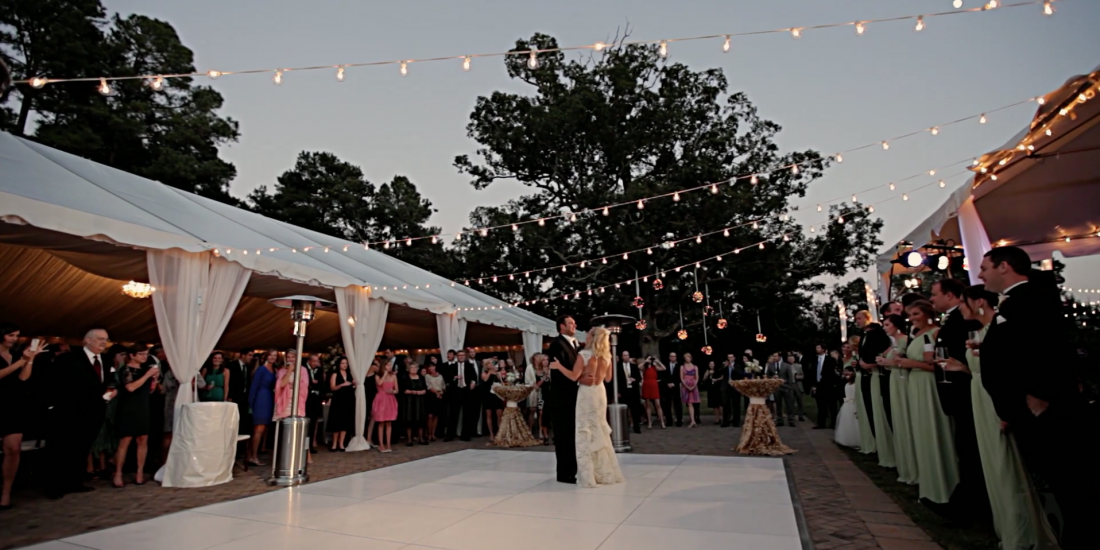 Martha grew up in Wake Forest and before The Sutherland Estate & Gardens was a venue, it belonged to her mother’s cousin, she remembers going there as a child and running through the back yard, and it was the perfect setting for her and Tyler’s wedding! Martha and Tyler wanted a very romantic wedding, with a lot of energy, dancing and champagne! She chose a soft color pallete of  White, Ivory, Champagne, and a hint of Mint Green which translated very well under the tent and lights behind the venue. They had a cigar lounge on the outside patio, and beautiful lights strung over the dance floor and in the tree. Martha wore her mother’s veil (something old), and a piece of her future mother in law’s jewelry (something borrowed), attached to her bouquet was a small white bible that belonged to her aunt on her mom’s side who passed away at a very young age. Her name (Martha Cozart McLeod) is embossed on the bible and it was carried by Martha’s mother in her wedding as well, and this is also whom she was named after. It was such a beautiful, elegant and timeless wedding!

“This is beyond amazing! Thank you so much for the incredible work; I am so impressed and enjoyed working with both of you so much!”…Martha, Bride

The Meeting…
They were set up by her sister’s roommate. She was not looking for a relationship, but after the push from her girlfriends, she agreed to a first date at 42nd St. The instant chemistry resulted in over a year of companionship, laughter, beach trips, and crazy love.

The proposal…
It was a RANDOM Wednesday night. She was at an event with her sister and mother. He kept texting and asking when she would be at her house. (unlike him) After telling him that she would be home an hour before she arrived, she found him in her apartment on one knee with flowers. She was so caught off guard that she backed up and continuously asked “is this real?” After he had to ask a second time, of course she said yes. There were lots of tears (on her end) and disbelief, but much awaited happiness.