The Washington Duke Inn played host to Ann + Matt’s Durham, NC wedding. Their wedding day was filled with class and elegance which was all brought to life by Erin McLean Events. We worked alongside our talented friends at Walters and Walters photography and it is no surprise that with such a talented team, their wedding is featured in Southern Bride and Groom Magazine. 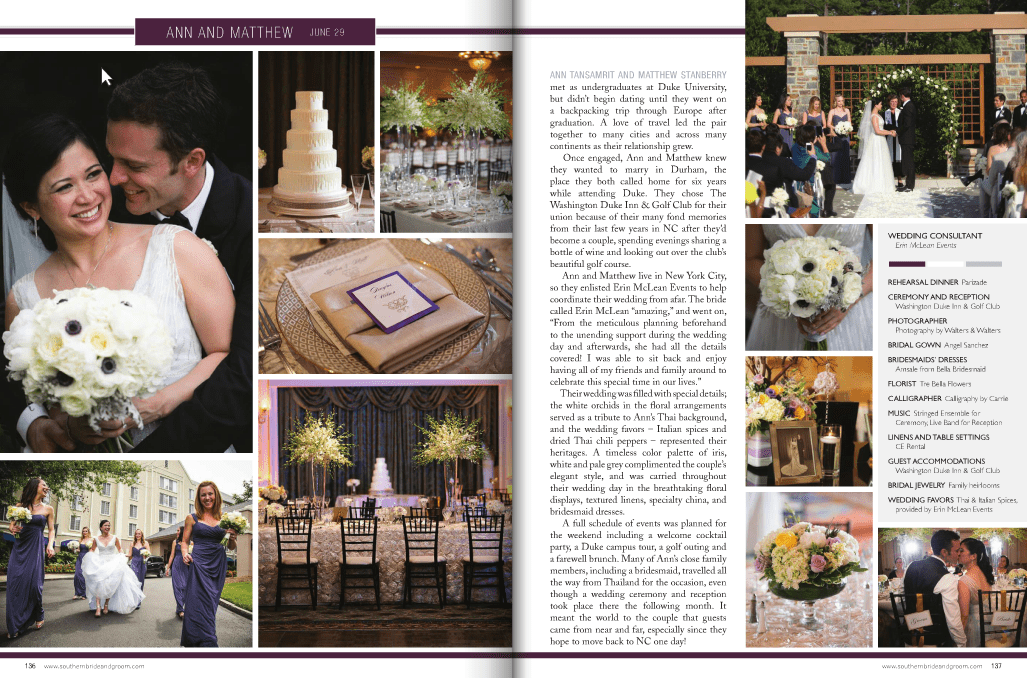 They had a meeting period rather than a singular event as is only really possible for people who meet each other through school, whether it be grade school, high school, or college. There was clearly a period in their senior year where they started to really notice each other (e.g., Ann calling Matt’s room to speak with his roommate, and being too flustered to say hello when Matt answered), but it wasn’t until they took a fateful backpacking trip through Europe that they started dating. They were in Monterosso, which is one of the five villages that make up the Cinque Terre region of the Italian Riveria, and one evening they made their way down a path that hangs out over the Ligurian Sea and kissed for the first time. The rest is as they say, history.

The Proposal…
Matt planned a trip to the aforementioned Tanglewood, which is a huge outdoor amphitheater and park in the mountains of western Massachusetts where the Boston Symphony Orchestra and Boston Pops play during the heat of the summer. It was July 6th, opening weekend of the 75th anniversary of Tanglewood and July 4th weekend. Ann sensed that something was coming, but she assumed that Matt would wait until July 7th when Joshua Bell, her favorite violin player, was playing. Instead, Matt walked Ann through the beautiful Tanglewood grounds where he played as a kid, found a quiet spot next to a fountain standing amongst the hedges that dot the grounds and dropped to one knee and asked very simply ‘Will you marry me?’. Ann dropped to her knees also and of course said yes. They called our friends and family and then went back to our picnic, opened a bottle of champagne, and watched the 75th Tanglewood anniversary (all-beethoven just as it was 75 years earlier) show capped out fittingly with a gorgeous fireworks display.

”We watched the video over the weekend and absolutely loved t! You captured the essence of our big day perfectly… Thanks to both you and Toni for an amazing job well done!”…Ann, Bride

5.0/5.0
Quality of Service:  (5.0/5.0)
Responsiveness:  (5.0/5.0)
Professionalism:  (5.0/5.0)
Value:  (5.0/5.0)
Flexibility:  (5.0/5.0)
Chris and Toni were so great to work with and really captured the essence of our day perfectly! They took the time to understand our style and what was most important to us … Most importantly, on the day of our wedding, they worked well in the background with the photographer – capturing all the key moments without us really even realizing they were there!
SHARE THIS STORY